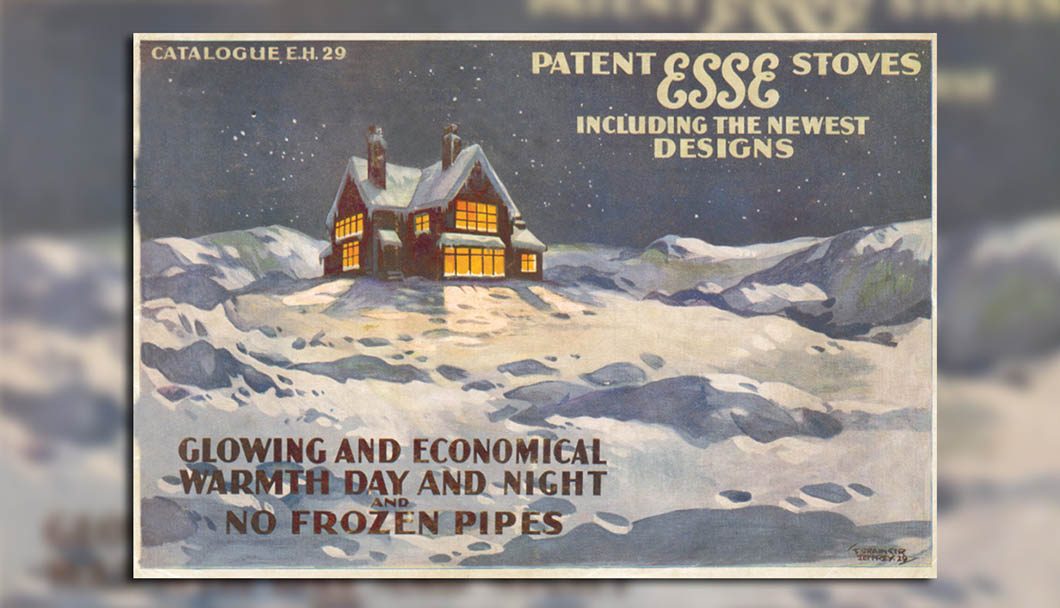 From warming plates and toasting bread, to ‘ironing’ clothes and even a safe haven for young animals, the family ESSE really was the heart – and the hearth – of the home for Judi Rebelo growing up. In fact, back in the 1940s and 50s, the ESSE was not just an household appliance for Judi, but a major part of her childhood. A recent trip to Rangemoors in Winkleigh, Devon was all it took for some wonderful memories to come flooding back as she browsed the ESSE cooking stoves in the showroom there…

“I was born in December 1943 and we did not have electricity or even mains water when I was little” Judi recounts. “We got a generator when I was around four or five, but before that we used the ESSE for everything. The family home was called Cloister Hall Farm, which was built in 1224 and was part of a Benedictine monastery that was destroyed by Henry VIII during the dissolution of the monasteries. The house was very big with a front door, a side door and two back doors. Of course there was no central heating, so we had open fires in all the rooms – even the bedrooms – but we never lit them so we spent most of our time around the range in the kitchen.”

Judi lived with her mother, father and was the middle child in between two brothers in the Devonshire village of Frithelstock, near Great Torrington. With both her mother and father each being one of seven siblings however, the house was always full of aunties, uncles and some 25 cousins, with the ESSE working overtime to make sure everyone was warmed and well fed.

“We had a big ESSE with a piece on the side that heated water, a toasting oven with a special bread fork; where we would brown one side then flip it over, and my mother would even use this same method too to ‘iron’ our clothes underneath the lids for the hot plates! Later when the ‘new-fangled’ irons came into use, we would warm it on the hob then spit on it to see if it was hot enough to start using.

“There were nearly always clothes and cloths hanging on or around the ESSE to dry off, and the shelf above the range was perfect for proving bread, and yeast mixture for saffron cake, as well as storing plates, pots and pans.

“Perhaps one of the most memorable aspects of our ESSE though, was the warming oven underneath. I think its intended purpose was to warm plates or slow-cook recipes (we made meringues in it sometimes), but in our house this compartment was mostly used for ailing animals, such as lambs, piglets or chickens! As a child it was always nice to open it up and see what my father had put inside to try and revive.”

When Judi’s mother and father switched on to electricity with a new generator, they never stopped using the ESSE, even if its function in the home changed a little bit. Now with a fridge, freezer, washing machine and even an electric iron, Judi’s mother no longer needed the hot plates to press clothes and instead used the hob to scald cream and always kept a kettle just below boiling point so that whenever visitors came, they would be treated to freshly brewed tea and scones with jam and home-made cream. Judi herself, would make her own yogurt and keep it on the back of the cooker in a Thermos flask.

During their teens, Judi and her brothers would host parties for their friends, with Judi in charge of the cooking, all on the ESSE of course. Later in her 20s, Judi ‘flew the nest’ to travel for two years and upon her return, the family had upgraded to a oil-fired ESSE, which was easier for her mother to operate and keep clean.

Judi remembers: “One cooks differently on a range cooker, especially if it’s solid fuel but I can’t really explain why. It’s more of an instinct than an exact science; even the wind blowing in a certain direction could make a difference, but the food was – and still is – always good.

“More than anything, I remember always being able to stand with our backs to the ESSE ovens to warm up and lifting the circular plate on the top to add more coal when it started to get cold. Having the ESSE was a way of life for us and our life revolved around that cooker.”

Since being established in 1854, ESSE has always been committed to providing effective and efficient stoves and range cookers that heat the home and feed the families that gather around them. While time passes and technology evolves at an ever-quickening pace, this ethos at ESSE has never altered nor faltered. Thank you to Judi Rebelo from all at ESSE for this lovely snapshot of her life growing up with ESSE – we loved being a part of the family!